Fashion&Culture Diary : letter to my friend-"Two and a half men" clan

Fashion&Culture Diary : letter to my friend-"Two and a half men" clan: - N ight, alone at home , h olding a cup of milk in hands, a thought suddenly comes around my brain- At the same night, same moment , what...
Posted by Unknown at 3:30 AM No comments:

a fantastic description of "kissing"

"This kiss wasn't the innocent first taste of love between two friends. Robbie didn't freeze this time, no longer a boy unsure of oncoming masculinity. This time, he let the bucket fall, his fingers tangling in my hair as he pressed his lips against mine. His body met mine, his heat seeping through wet clothes and filling me with a fire of want. Our tongues met, the taste of freshwater mixing in with the kiss. It was sweet and clean and everything I had ever expected in a kiss"

Posted by Unknown at 9:34 AM No comments:

what is the "culturessays" ?

"Culturessays" is an compound term,which is constituted by "Culture" and "Essays". So it is obviously to infer that "Culturessays" is a blog which releases tens of tens essays on  varieties of cultures. The author (Royal Wang) of "Culturessays" also runs a fashion blog, which maybe some of you has subscribed "Fashion&Culture Diary".

For any info ,questions or any cooperation please contact the author at the following forms:

-You  must feel curious bout the so-called "Jennifer Lopez Phenomena". Either do i until i read a culture blog issue on the Washington Post. This phenomena actually has some inextricable vinculums with the disputed reality TV culture. And adding this phenomena named after Jennifer Lopez is because her judging time on American Idol does bring her lot of benefits.quoted from the Washington Post as"The singer/actress went from slowly fading from the public eye to catapulting back into pop culture-sphere three years ago — and it’s all thanks to her time on “American Idol” since 2011.

-Easily  summary from the lines above :Being a part of Reality TV saves  Jennifer`s career for sure. Frankly,this issue reminds me of the substantive distinctions among the years before and after Jennifer sitting at "American Idol" .

-Reading some Network Data, before her "American Idol" time,Jennifer almost fades from public spotlight.It was some cheerful singles including Waiting For Tonight,” “Jenny From the Block,” “Love Don’t Cost a Thing” and Jennifer`s enthusiastically spirited dancing make her fame ring around the world. And even Jennifer`s  subsidiary career,acting which is not as much commended as her singing career,but this happens to tell how popular Jennifer used to be. Resent years approaching to 2011,me included,will rise a doubt: What is exactly Jennifer doing ? Any form of her performs seem to be reduced and rarely seeing her appearances in some public occasions.I even used to think she had retired arena for good. As all the things slipping off,"American Idol" offers a favor to Jennifer as being a number of judging panel which proves to be a miraculous transformation for her career. Do you remember that hit single "on the floor"? and even remember Jennifer receiving AMA(American Music Award) for best Latin Artist? Those are the best abstract achievements granted by Reality TV culture. So far, it is rational to explain why Christina Aguilera, Blake Shelton and even Keith Urban following Jennifer`s suit to become the numbers of the panel of different forms of reality TV shows.

-Well  i was reading the The Wall Street Journal online and i come to get interested in an article titled as"the best petite-size Handbags".Well,then,i come to thinking about much further than what the article says all. when a press releases an article about a product and describes it with some  terminologies, was that means this product here referred to "petite-size handbags" progressively becomes a new trend? Or simply get on fire in the industry for a specific period? I chose to believe the second interrogative sentence more.Shutting back to any period of fashion history not a single style trend lasts from its birth to its entire progresses. So come back to the subject of title. My answer is the over-size handbags is periodically and temporarily took over by its younger sister petite-size handbags.I could remember that there are not some far seasons ago tens of tens fashion-apprentices get influenced by magazine-editor`s beloved over-size handbags.Fashion trends need to be widely advocated and we customers is like marketing Victims.Not only in this case but also will last to all other cases. Second thought on the subject discussed here,the emphasis will never changed,either petite-size handbags or oversize handbags is a simple example of how the fashion marketing deifies their products and what makes our customers  be the creditors of their deified-trends. 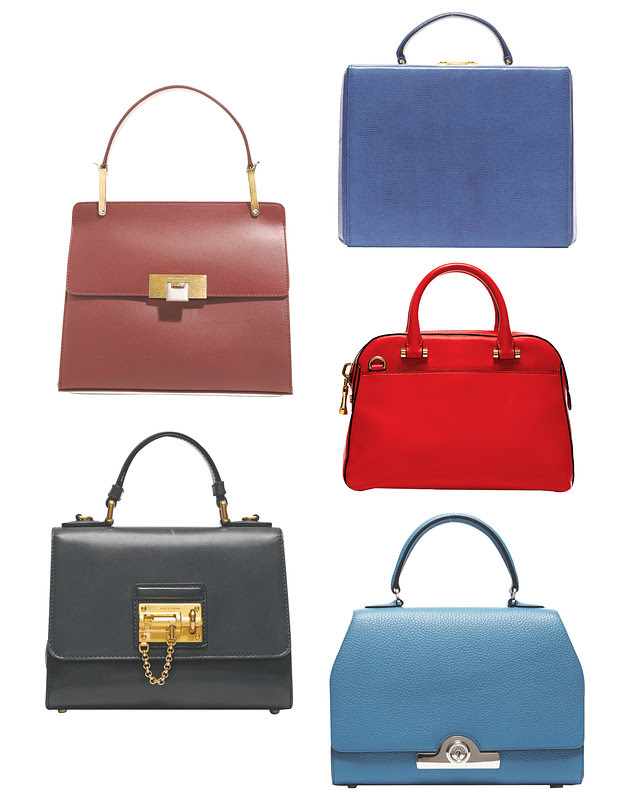 Quotes from this article:

"the emphasis will never changed,either petite-size handbags or oversize handbags is a simple example of how the fashion marketing deifies their products and what makes our customers  be the creditors of their deified-trends."